The C-2299/VRC is used between receiver-transmitters of Radio Sets AN/VRC-49 and AN/VRC- 45 to provide automatic retransmission of signals between radio sets that are too far apart to communicate directly with each other.

However, when the C-2299/VRC is connected to the AM-1780/VRC of the radio-intercom system the receiving circuits of the receiver- transmitters No. 1 and 2 are not available at the C-2299/VRC. Thus, radio communication is conducted from the crew member control boxes. Also, for the retransmission operation, the INSTALLATION switch of the AM-1780/VRC is set to the RETRANS position. Under these conditions, the retransmission signals are available on the ALL position of the crew member control boxes.

Use as a remote keying station for VRC-12 series radios

The C-2299 can be used as a remote keying station for the VRC-12 series radios. When hooked to the MT-1029, the C-2299 allows remote use of the microphone and speaker for up to two radios. A typical example is for the C-2299 to be installed in the front cab of a vehicle while the radios remain i the rear, or under the seat.

Use as an auxiliary interface for microphones and headsets

The C-2299 is the only way to properly use a microphone directly on the VIC-1. 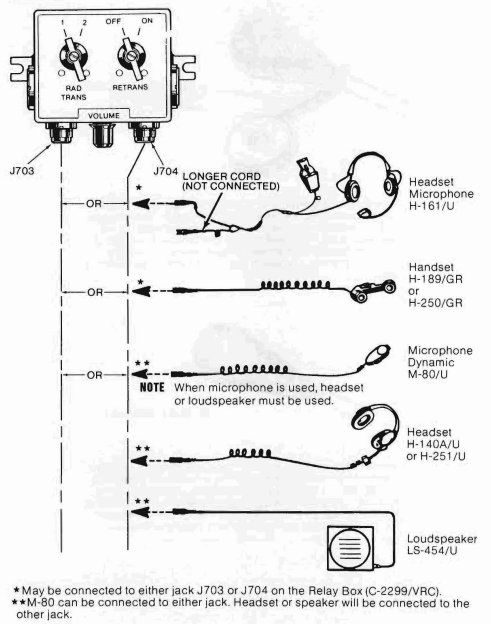 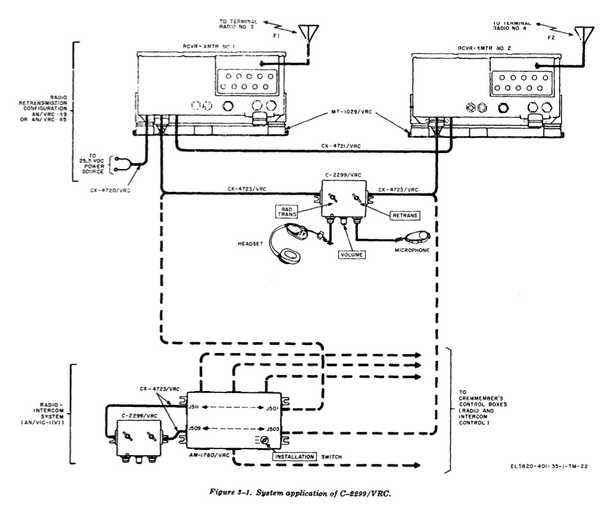