The bomb release timer was used on many US made WWII aircraft to time the release of bomb out of the aircraft. This allowed the pilots to accurately space the impact of the bombs based on airspeed. Generally the timing is adjustable from 0.08 second to 1 second between pulses. The B-2A connects two pins together on every pulse. These pins can be used to complete a circuit to drive a relay or similar switched item. It does not provide any voltage on the connected pins, only acts as a momentary switch. It uses two thyratron (2050) tubes to regulate current into the relays. Timing is controlled by the charge and discharge rate of capacitors through resistors.

There is little information about this device. I only found an article from 1946 detailing how to modify the device for use as a solenoid control. The article is available for sale online, but you can get this easily at your local library for free.

Conversion of a bomb-release control to activate a solenoid stirrer. 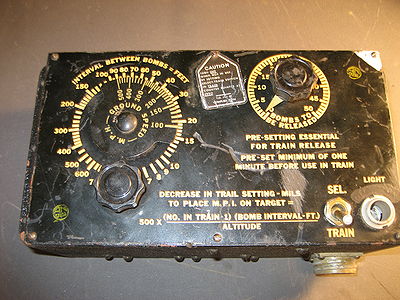 There are three main controls

Interval Between Bombs
Controls the time between the pulses
Bombs to be released
controls the number of pulses 1-50
Sel / Train
not sure what this is for.

The sequence will stop once the counter reaches zero. you can also make a simple modification to prevent it from stopping, basically pulsing forever until you move the "Sel / Train" switch to "Sel"

Inside the unit is a set of switch contacts that are separated when the counter turns to zero, by connecting these wires together, they never break connection, allowing the sequence to continue endlessly. 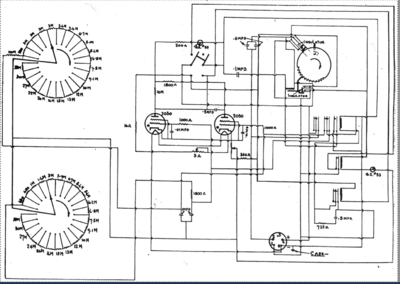