Panoramic Adaptors BC-1031-A and BC-1031-B are electronic equipments which, when used in conjunction with a superheterodyne radio receiver, projects signals on the screen of a cathode-ray tube. These signals can thus be observed visually in addition to being heard from the loudspeaker or headset. The conventional radio receiver will normally receive just one signal at a time, since it is designed to pass only signals within a band of frequencies 10 kilocycles (kc) wide, or less, for any single setting of the tuning dial. Upon connecting the panoramic adaptor, however, the operator will be able to see on the screen all signals receivable throughout a 200kc-band. This band extends 100kc above and below the frequency to which the receiver is tuned. The panoramic adaptor is a device which allows the operator to visualize a portion of the radio spectrum on a two-dimensional surface (screen of a cathode-ray tube). On the horizontal axis (baseline) of the screen, frequencies are shown, and on the vertical axis signal amplitudes are shown. 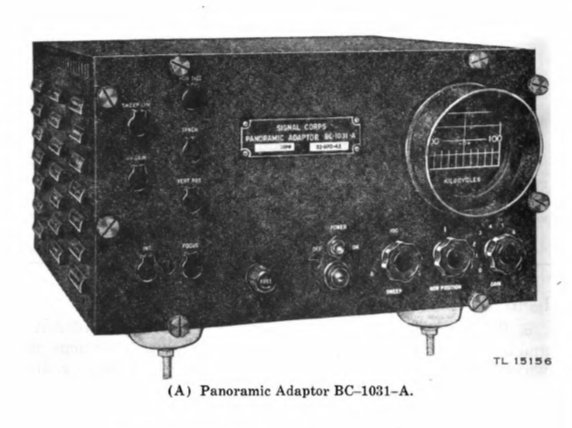