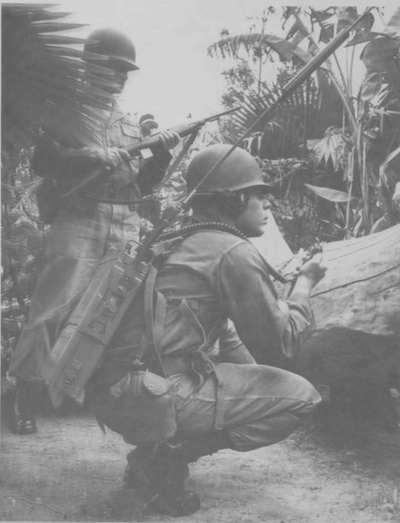 Radio Set AN/PRC-74 or the AN/PRC-74A is a lightweight, two-way communications set that is capable of receiving and transmitting voice and telegraph signals. Single-sideband (SSB) modulation is used for voice transmission, and continuous wave (CW) modulation is used for telegraph transmissions. The voice and telegraph receptions are demodulated and applied to a headset. The frequency range of the radio set for both receive and transmit modes of operation is between 2.0 mHz and 11.999 mHz for the unlettered and A models and 2.0 - 17.999 mHz for the "B" version.

Three types of antennas are supplied with the radio set. Operating in the low end of the high frequency spectrum, the range of the radio set may be extended to hundreds of miles with the proper selection of frequency and antenna type.

The operational features of the AN/PRC- 74 and AN/PRC-74A are identical except that the A model has been modified by MWO 11- 5820-590-35/1 to permit operation with the AN/GRA-71 coder burst equipment. Refer to TM 11-5820-590-12 for operational procedures for coder burst operation. Refer to paragraph 1-59 of the technical manual for circuit differences between the two models.

Radio set AN/PRC-74b is organic to special forces units and to military assistance teams in southeast asia. It provides long-range patrols with a means of communicating with their base stations. The AN/PRC-74B is interoperable with other high-frequency single sideband radios such as the AN/GRC-106

The AN/PRC-74 radio was developed by Hughes Aircraft Company primarily for the military market. It was first issues for user tests in 1964. in 1966 this radio was modified to provide a continuous wave (CW) transmission capability. The modified set, the AN/PRC-74A was initially delivered for Army use in June of 1966. The AN/PRC-74B, issued to Army units in early 1967, incorporated another modification, which extended the set's frequency range from 2 - 11.999 MHz to 2 - 17.999 MHz.

Sensitivity
0.7 microvolt for 10 db, signal plus noise to noise.
Selectivity
.3-db points at +300 and + 2,700 cps, 45-db points at -350 and + 6,500 cps (referenced to carrier frequency).
Audio output
1 mw minimum into a 500-ohm headset.
Audio distortion
10 percent maximum at frequencies between 300 cps and 2,700 cps with an audio output level of 4 milliwatts.
Power source
Determined by fixed or portable requirements: An external power supply may be used as a power source during fixed operation. For portable use, wet or dry battery pack may be used.
Input power
+ 10.5 to + 17.0 volts 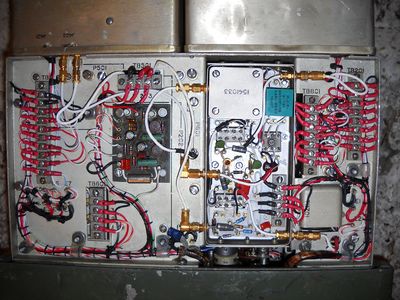 These Images are from a complete wiring harness swap. The front audio section of a PRC-74 was hacked to pieces in a botched HAM conversion. I replaced the entire wiring harness of the radio with a donor PRC-74B after confirming every connection in the harnesses were the same.

I replaced the harness from left to right, only removing parts as i was ready to connect the new harness.

The radio includes a whip and an adjustable dipole on reels.