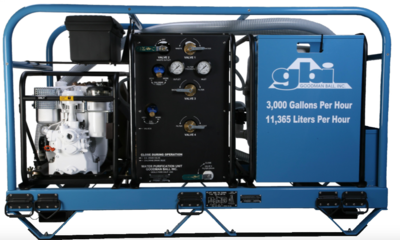 Safe drinking water is something that is often assumed, but should never be taken for granted. In an earthquake, storm, flood, or civil strife, etc., people are often deprived of their life blood: safe drinking water. The death and rampant sickness that follow disasters are to a great extent, preventable. The Model 6120 was developed for the US Military as a fast response, medium fresh water purification system that can make all the difference in the world in your next emergency. No systems are as effective as the Model 6120.

What is the GBI 3000?
The GBI 3000 is a mobile, self-contained water purification system that is comprised of a diatomaceous earth (DE) filter and a chlorine injection system. Its compact size and portability allow it to purify 3000 gallons per hour of water at the point of need.

What contaminants does it remove?
DE filtration has been proven to remove particulates in the one micron range including turbidity, bacteria and chlorine-resistant pathogens such as cryptosporidium and giardia. Certain grades of DE have been certified to NSF/ANSI Standard 61 for drinking water system components and independent university labs have confirmed that DE can remove >6 logs (99.9999%) of the above contaminants. The chlorine system is designed to kill any viruses present in the feed water. It is widely recognized that contamination from microbes and viruses pose a greater immediate threat to human health than most other contaminants.

How does such a small system deliver so much water?
DE has unique physical and chemical properties that allow it to be such a highly effective filtering media in many filtration applications: its inertness in almost all liquids, its internal pore structure that provides high permeability, and its low bulk density.

How many people does it take to operate this system?
The system has a modular design so that each component (filter, control panel, pump and diesel engine) is no heavier than 200 lbs. This allows two people to set up the system in about fifteen minutes. The system can be operated and maintained by one trained person.

How long does a filtration cycle last?
That depends on the amount of impurities in the feed water, but the system can be adjusted to efficiently handle varying amounts of contaminants. Typical operation calls for backwashing of the system after 20 hours of operation. Only about five percent of the total amount of water processed is required for the backwashing operation.

Is this new technology?
DE filtration in conjunction with chlorine disinfection has been used by municipal water treatment plants for over 80 years.

Why do you use chlorine as a disinfectant? What about ozone or ultraviolet light?
In many environments the water distribution systems after purification are susceptible to microbial contamination, and chlorine offers better residual disinfection than either ozone (O3) or ultraviolet light (UV).

What about harmful disinfection byproducts?
Disinfection byproducts (DBPs) such as trihalomethanes (THMs) are produced when chlorine reacts with biodegradable organic matter (BOM). Because of the efficient removal of this type of contaminant by the DE filter, there is little contact with chlorine and the BOM. While ozonation does not form THMs, it does form other harmful byproducts, and when water containing bromide is ozonated a byproduct called bromate is formed that is a suspected carcinogen.

Is your system capable of removing all NBCs?
No. A system must remove contaminants below the molecular level down to the ionic range in order to reduce all the nuclear, biological and chemical (NBCs) contaminants from any feed water source to levels that meet current drinking water standards.

Can it desalinate seawater?
No. The salt in seawater is at the ionic level and represents one of the smallest-sized particles that must be removed to produce drinking water.

What about reverse osmosis? Doesn’t that remove everything?
Reverse osmosis (RO) removes contaminants by continuously recirculating water through semi-permeable membranes at high pressure. These membranes have extremely small pores that can remove impurities across the entire filtration spectrum even down to the ionic range. However, due to the amount of surface area required, the size of the unit and its capital cost are exponentially higher than the GBI 3000. And as complexity goes up, so does the cost of maintenance and training. Membrane fouling is an issue that often means more water is wasted for backwash—typically between 25% and 50% of the total water processed. This is a critical factor where there is limited availability of source water.

So how does ROWPU technology compare with the GBI 3000?
A reverse osmosis water purification unit (ROWPU) that could purify 3000 gallons per hour would cost over fifteen times the cost of a GBI 3000 system and would take up a forty foot shipping container. Conversely, a ROWPU that fits in the back of a HMMWV would process less than 200 gallons per hour with a capital cost almost four times that of the GBI 3000. Because of the amount of energy required to pump water at high pressure, the operating costs are three to four times that of a GBI 3000.

When it comes to water purification, what’s the answer?
The bottom line is to diagnose what is in the source water and prescribe the purification technology that removes only the contaminants present. In many cases turbidity and microbiological pathogens are the only contaminants present making the GBI 3000 the most cost effective technology in terms of mobility and throughput.

The 3,000 Gallons Per Hour (GPH), Light, Medium, Tactical (LMT), Water Purification System (3000 LMT) is capable of purifying a fresh water source (less than 1,500 TDS) at a rate of 3000 gallons per hour. The unit was designed to be transported by tactical vehicle or air lifted by helicopter to remote sites. The unit can also perform numerous additional functions such as decontamination, fire fighting, and irrigation.

The 3000 LMT weighs 680 lbs, is a frame mounted, skid based, diesel operated, diatomite type unit, that requires 2 Marines to operate. The 3000 LMT uses three different chemicals for the filtration and storage process.

Chlorine
The Chlorine is used to kill bacteria in the water and to prevent its growth during storage. The chlorine comes in a granular form and is mixed with water into a solution.

Polymer
Polymer is a coagulant used to aid in the filtration process. Polymer creates a chemical reaction in which two or more small molecules bond together to form larger molecules. This makes the filtration more efficient.

Diatomaceous Earth
Diatomaceous Earth (D.E.) is any class of minute planktonic unicellular or colonial algae with solidified skeletons that form a diatomite, which is a light friable siliceous material derived chiefly from diatom remains and used especially as a filter. D.E. is a white powdery substance similar in appearance to flour and baking soda. The D.E. is going to be forming a cake on your filter elements to perform the filtration process.