Within a LEN, SEN or NCSuper High Frequency (SHF) Radio Set AN~GRC-224(P) provides LOS radio links to interconnect the AN/TRC-190 multichannel radio terminal with a LENS, SENS, or node switch NS when terrain features or tactical mission requirements dictate the use of radio rather than coaxial cable. (a) It operates over four sub-bands: sub-band C (14.718 to 14.816 GHz), sub- band F (15.033 to 15.131 GHz), sub-band L (14.648 to 14.816 GHz), and sub-band M (15.033 to 15.201 GHz). (b) It comes in two models. Model A transmits on sub-bands C or L and receives on sub-bands F or M. Model B transmits on sub-bands F or M and receives on sub-bands C or L. The SHF links must be configured so a model A radio always lifts up with a model B radio. (c) Its radio consists of a radio frequency (RF) unit and a control unit. The RF unit includes a receiver and transmitter mounted on a two foot diameter parabolic reflector antenna. The control unit is normally mounted inside the shelter of the LENS, SENS and AN/TRC-190 radio terminals. Figure illustrates the AN~GRC-224 radio set (unmounted) with antenna. 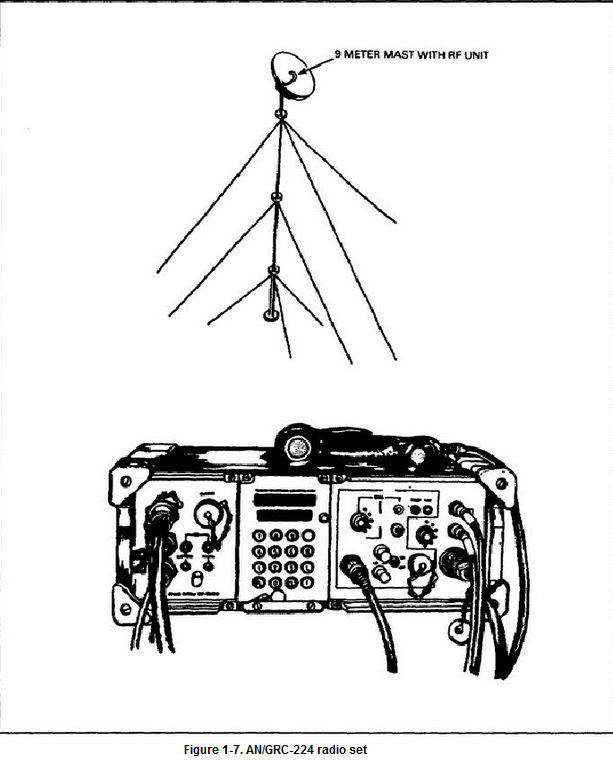